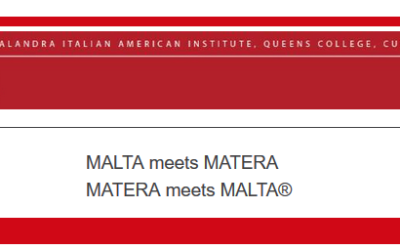 11 ottobre 2018 0
For immediate release
MALTA meets MATERA
MATERA meets MALTA®
Press conference
“Malta meets Matera-Matera meets Malta®”
October 10, 12:30 pm
The John D. Calandra Italian American Institute
25 West 43rd Street, 17th Floor
New York
www.calandrainstitute.org
The Program
Greetings: Calandra Institute’s Dean Anthony J. Tamburri
Speakers: Mariangela Petruzzelli, founder and producer of the Festival “Malta meets Matera-Matera meets Malta®”; Cav. Josephine A. Maietta-President AIAE-Association of Italian American Educators; Leonardo Metalli- journalist Rai and Founder of “Mad for Italy”; Anthony Pasquale, journalist ICN-Radio-NY.
The Project
Mariangela Petruzzelli, TV journalist and author, originally from Basilicata (Lucania), is the founder of the project, together with Maurizio Urso, who has been working as a photographer in Malta for more than twenty years.
The Festival offers social and cultural value by exchanging and sharing experiences and promoting the two territories of Malta and Matera from various perspectives such as marketing, tourism, and history.
This synergy will culminate in the signing of a socio-institutional agreement that “twins” the City of Valletta and the City of Matera.
The Exhibition
One of the most important elements of the Festival will be the photography exhibition by Maurizio Urso, who, together with a team of local professionals, aims to bring together La Valletta and Matera by sharing common elements as well as celebrating unique ones.
The exhibition will open next December in La Valletta and will continue in August and September in Matera.
The “Via dei Cavalieri di Malta” in the World
The project “Malta meets Matera-Matera meets Malta®” has entered into an agreement with the Municipality of Grassano (MT), the native town of New York City Mayor Bill de Blasio’s mother, Anna Briganti, in order to create the itinerary “Via dei Cavalieri di Malta,” involving all four cities–Grassano-Malta-Matera-New York–in which the cultural heritage of the Malta Knights has been significant.
Mariangela Petruzzelli, founder and producer of the Festival, has said, “I am happy to return to New York for both Miss Chef 2018® NY and the Festival ‘Malta meets Matera-Matera meets Malta.’ My main goal is to show these wonderful places that are so rich in culture and traditions and to create a bridge and an exchange between people and cultures.”
The Festival Schedule
The Festival will start next December with the exhibition at La Valletta-Malta, in the Government Palace, and it will continue in August-September 2019 in Matera, at Palazzo Viceconte and in the museum space Ex-Ospedale San Rocco. The project is divided into different sections, including: photography; music; theater; literature; story-telling; cultural heritage and architecture; travel and documentary film; tourism; and food and wine.
Beside the exhibition there will be a program of meetings with architects from Malta and Matera who will focus on the value of the European cultural heritages of the two territories.
The Miss Chef® International competition is part of the Festival. This competition has taken place in New York since 2014. During the Festival this year, the competition will feature chefs from Matera and Malta as well as wine and food tastings and local products to promote the local food and tradition.
Ufficio Stampa Nazionale
MISS CHEF®NEW YORK 2018
Cell.: +39 331 5934925
e-mail: mariangelapetruzzelli@gmail.com; stampa@lucar13.sg-host.com;
mariangelapetruzzelli@hotmail.it; misschef@hotmail.it;
&
Ufficio Stampa US
Festival “Malta meets Matera -Materameets Malta®”
Liliana Rosano
Cell.: +1 641 451 7350
e-mail: rosano.liliana@gmail.com